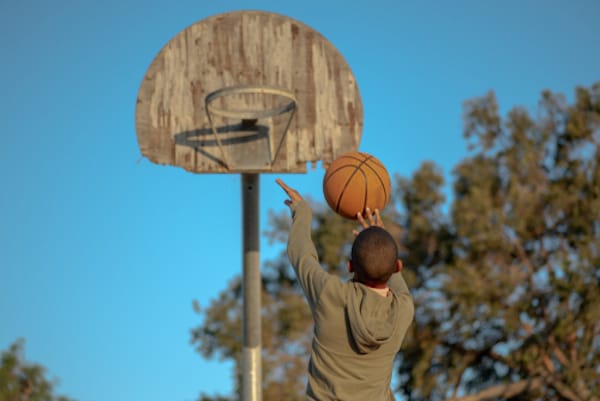 A number of years ago, we made arrangements to have a seventeen-year-old boy spend the school year with us. His parents were moving and David wanted to finish his senior year in our area. When they brought him over for a house visit, he and I ended up playing basketball. It was a friendly way of saying hello.

But it was more than that. With boys and men, one-on-one basketball is a fair measure of personality.

After we played, I knew it wasn’t going to work out. I should have trusted my intuition, but telling my wife, “I didn’t like the way he played basketball,” didn’t seem convincing. I let it pass. It was a mistake.

As a boy, anything with a ball interested me. Sometimes it was the only thing that interested me. Often, when words failed me, I found them by talking about sports. When there were no words at all, I expressed myself on the field.

Sports are one way men and boys communicate. How a man plays the game and deals with victory and defeat, success and failure, says a lot about who the man is.

In my one-on-one game with David, I gave him the ball first. A small thing, but a sign of the way the game would be played, if the signal was picked up.
David turned his back to me and muscled his way towards the basket. I let him come, then stood flat-footed, not challenging him, while he tried to hook a shot in. He missed.
“Damn!” he said.
I grabbed the rebound and took it back. As he came to me, I took a shot from eighteen feet. It went in. He exhaled with disgust. “Lucky,” he said under his breath. He gave me the ball back and stood six inches from me, ready to swipe the ball.

In sports, as in any men’s interaction, there are unspoken rules. Especially in informal games, there is an unwritten rule about how closely someone is covered, how much contact there is. In a one-on-one basketball game, the rule of thumb is that the game begins outside, or with a fake, then you drive towards the basket, hoping to slip by the defender. Backing in towards the basket and muscling towards the goal on the first play is bad form. You allow your opponent to shoot from the outside for quite a while before you tighten your defensive clamps. In a game to eleven, you don’t start really pushing until the score is at six or seven. David was backing in toward the basket awfully early. And skin-tight defense after the first point was premature. It was not a good sign.

In pickup basketball, no words are necessary. The dynamics of the game are also complicated by the social elements of the situation. Basketball is rarely just about the game, and our game was no different. Offering him the ball was a sign that this was my house and he was welcome. But he missed the signal. I was older than he, in my early forties, and there needed to be some sign of respect coming from him. Respect for an elder is shown on the playing field too, at least initially, before the game gets close, and especially when you might be living in your opponent’s house. I didn’t get that from him. In fact, what I received from him was not gracious at all. It cast doubt on his ability to be a guest.

David nailed a jumper. “Nice shot,” I said. He didn’t say anything. He was down three by now and had no intention of losing.
I tugged on my shorts. I was winded.
He didn’t pause. He dribbled hard, heading towards the basket, his elbow up to fend me off.

There is a point in a good game when you look at your opponent and you both admit with a glance that you’re in the middle of something that has transcended the surroundings. Often it’s just a quick grin when you both catch your breath after somebody’s scored, or made a good play. It’s an acknowledgment that something special has happened, that you’re where you want to be, regardless of who’s ahead. When its done right, the game is bigger than the ego – it has become a test of your will and your ability, a gift given to you by the skill of your opponent. David missed that chance, too.

I stayed outside. In a one-on-one game, age and treachery will often beat youth and speed by pounding the ball in towards the basket. I didn’t want to do that. But I did clamp down on defense. His ball handling was sloppy.
When I took the ball, he slapped at my hands and fouled me. I made no call. He got the ball back and drove to the basket.

Who calls the foul? First, you don’t call little slaps or bumps in a pick-up game. The unspoken rules are “No harm, no foul” and, more importantly, “Call your own fouls” – if you clearly foul someone, you should own up to it and give him the ball. It’s good etiquette, a sign you understand the rules and you know you’ve broken them. The game is bigger than you. If someone doesn’t call a foul on himself when it clearly was a foul, and the person fouled has to call it, something has been broken. Winning has become more important than playing. That might work in the NBA playoffs, but not on the driveway. I noticed.

I didn’t call the foul. Now we were both winded, and with each basket I scored, David became wilder in his play. He pushed on both offense and defense.
Finally, after he had shoved me one time too many, I called a foul, and he muttered under his breath.

The game had become competitive. Talk stopped. In the end, pushed into a corner, I got competitive, too. While I called no more fouls on him, and gave him the outside shot, I didn’t give an inch when he came inside. It is the competitive streak that runs in men; it’s hard not to answer the call. In my mind, my guest had crossed the line in his behavior. I would be polite, but damned if he would beat me.

It is paradoxical but true that unbridled competition – the petty displays of winners and losers on television or in pickup games at the “Y” – can ruin the game. It’s a loss of perspective on what sports and life are about. I may not have been as bad as David – David was young, and, as became clear through the rest of the school year, lacking in guidance about everything from ethics to courtesy to compassion – but like a greyhound at the race track, I, too, jumped at the rabbit. In this sense, people like David are my teachers: how I respond in a sporting event is a measure of who I am. You can say it’s up to me to shrug off the aggressiveness of a seventeen year old, and you’d be right. I’m not a Boddhisatva when it comes to sports.

David didn’t really have a chance against me. I might be old, but I’m not incompetent. A lot of seventeen-year-olds could kill me, but David didn’t have the skills.

In the game to eleven, I was up ten-six, then pulled back and let him catch up. I hit an outside shot for the final point. He slammed the ball against the garage.
Back in the house, his parents were sitting with my wife.
“What happened, big boy?” asked his father.
“He got lucky, “ his son said.
“You let him beat you?” the father asked. He shook his head. David looked away.

I should have known. He learned it all from his father. The worst of it came fifteen minutes later. He was playing my ten-year-old son and didn’t let him score a point. I should have stopped it right then, but I didn’t say anything, and we paid for it all year long with a kid who didn’t know how to play one-on-one. And he didn’t want to learn from me, not on the court, or when he was having trouble at school, or when I had to pick him up at the police station in the middle of the night.

Like I said, it was all I needed to know.

David has come and gone. I tried to be there, but he wasn’t interested. Thankfully, my sons have stayed, and one-on-one basketball is one of the things we do together.

And they’ve learned, not by my telling them, but by example. You start outside. You show respect to your opponent. You give the ball back if you foul. You acknowledge his skill.

And in the middle of the game, when it’s close, you smile.

Originally published on Heart of a Man

In the meantime, sign up to get email updates about the book here. 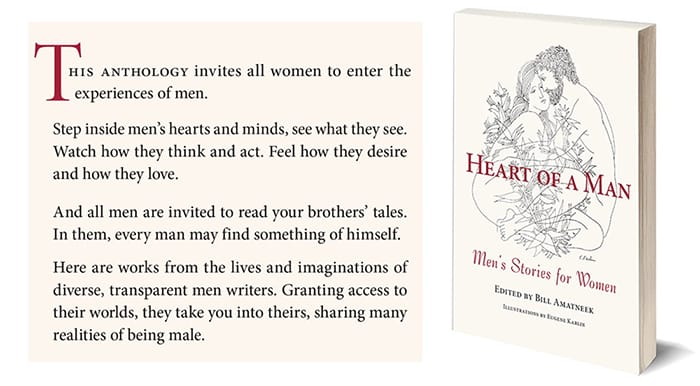 A step on the path to gender peace offers stories by men who are opening their hearts to women. the book is scheduled to be published in Summer of 2019.

Bill Amatneek guest-edited “The Men’s Issue” of Storytelling Magazine in March 2001, the magazine’s best-selling issue to date. His book, Heart of a Man: Men’s Stories for Women, an anthology of works by Michael Chabon, Phillp Roth, John Updike, Andre DuBus III, Tim O’Brien, John Crawford, Julius Lester, and 30 others culled from 500 worldwide submissions, will be published this summer by Vineyards Press. Bill has appeared in Rolling Stone, Down Beat, and Yoga Journal, and was anthologized in Encounters with Bob Dylan. His Acoustic Stories: Pickin’ for the Prez, won a Foreword Reviews “Book of the Year” award in Performing Arts & Music.

“One On One” is a gem.
It says so much in such a wise, warm way.
Thank you, Bill Harley.