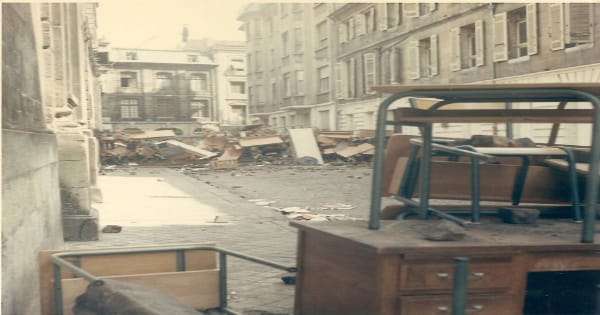 May 2 1968 riots broke out in France. Demonstrations started at Paris University and soon spread all over the country, drawing in more students, factory workers, left-wing political parties and artists. Protests, occupations, strikes, barricades and marches against The Establishment and dominant ideologies like capitalism lasted for the rest of the month and had a major impact on French society.

Maybe it was just a coincidence, but the 8th of that very month a revolutionary article was published in Le Nouvel Observateur, a popular French magazine. It was written by Emmanuel Le Roy Ladurie, a history professor in Paris and was called ‘The historian and the computer’. In his article, Le Roy Ladurie presents a short survey of promising developments in computational historical research of those times, when mainframes, magnetic tapes and punch cards where the only tools available. As one of the projects he mentions the reconstruction of the medieval Florentian population out of the cadastre (Catasto) of 1427 with the aid of computers at the university of Madison (Wisconsin).

Up till those days France was a leading country in the study of history mostly because of the so called Annales historians, among whom we encounter famous names like Georges Duby, Jacques Le Goff and Emmanuel Le Roy Ladurie himself. At the end of his article the author is warning his readers that this prominent position is at stake because of these new computational innovations in the United States: ‘Those young people are in data processing like fish in the water’.* If France wants to stay in the front ranks, ‘the historian of tomorrow should be a programmer or else he will cease to exist’.**

To us, when looking back, those words sound like a profecy. But to most of the historians addressed and for at least two decades afterwards, computers remained something totally vague and incomprehensible. From the early 1990’s on personal computers replaced typewriters and some historians still only use their machines for wordprocessing, websurfing and emailing. They must have frowned when from the 1970’s on particularly economic and social historians publiced their articles in academic magazines accompanied by graphs illustrating the outcome of their quantitative research.

But, as we know now, the march of the computer into science and society that Le Roy Ladurie noticed way back in 1968, continued steadily. A major turn in the humanities were the digitizing of texts and books and the growing availability of digital scans. New textmining techniques and software for searching big data and big libraries are definitely changing the outlook of the study of history. With the new digital tools historians are now able to zoom in from the macro perspective to the microlevel and back. But they should learn to use these tools. Or at least hire someone who knows how to use them. That’s where the digital historian comes in. Academics trained in Digital Humanities are the programmers that Le Roy Ladurie intended. Fifty years after this revolutionary month of may in 1968 his profecy turns out to be very true. The historian of tomorrow should be a digital historian or else he will cease to exist.

** I translated this rather freely from: ‘l’historien de demain sera programmeur ou il ne sera plus’.

Photo of barricade at Bordeaux in 1968 by Tangopaso – Self-photographed, Public Domain, https://commons.wikimedia.org/w/index.php?curid=59035514.

—
This post was previously published on LUCDH and is republished here with a Creative Commons license.
—