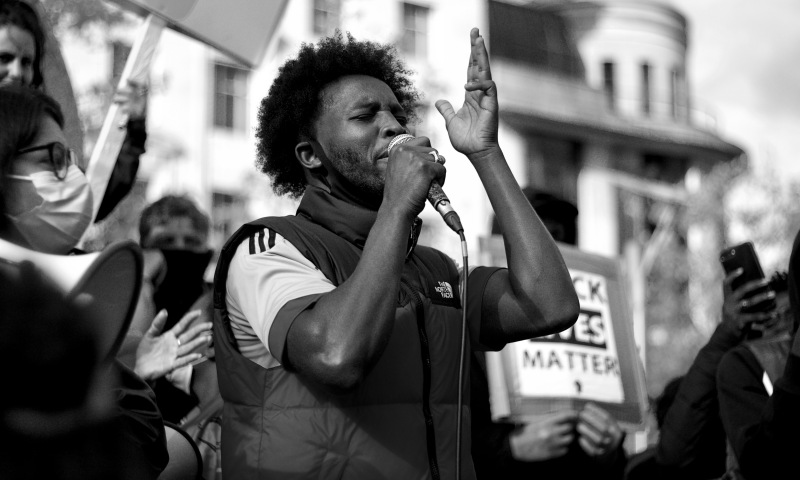 As the country eagerly anticipates a new Biden / Harris administration, the uncertainty of what this means for black Americans is looming overhead. This is because the historical lens through which many of us examine this country’s oppressive treatment of its own citizens and its response to our cries for justice, pre-dates the recent cases of racial terrorism and extra-legal police force used against black bodies. While there are those who persistently tell black people that we need to simply forget that violent part of America’s past, the fact that it is still the violent part of America’s present makes it impossible for us to forget. We have consistently witnessed how this country’s past behaviors have been an accurate predictor of its future actions.

America has abducted us, enslaved us, dehumanized us, massacred us, chained us, whipped us, raped us, tortured us, lynched us, disenfranchised us, brutalized us, criminalized us, mass incarcerated us, racially terrorized us, and systemically & systematically oppressed us for over 400 years. This is something that cannot, and should not, ever be forgotten. While the successful defeat of the Confederate Army in 1865 brought an end to chattel slavery, the two and a half centuries that it endured left a legacy that has lived on for an additional 155 years, to date. This is because it is one of the myriad ways, indeed the most heinous way, in which the original sins of this country were made manifest — those original sins being the social constructions of race, racism, and the lie of white supremacy. Although chattel slavery has ended, these social constructs have not, and it is because of these sins that black bodies in America continue to face an ever-present danger of racial violence, even with a forthcoming Biden / Harris Presidency. Perhaps even more so, due to the threats of a 2nd Civil War made by various extremist Trump support groups.

Racial justice is critically important in order to unite this country, and not only is the time for justice now, but it is 401 years past due. How much longer must we wait? Martin Luther King, Jr. said it best in his “Letter from Birmingham City Jail” when he wrote, “There comes a time when the cup of endurance runs over, and men are no longer willing to be plunged into an abyss of injustice where they experience the blackness of corroding despair.”¹ He goes on to say:

Dr. King’s words still ring true today. The civil unrest caused by the modern-day lynchings of Trayvon Martin, Michael Brown, Tamir Rice, Eric Garner, Freddie Gray, Ahmaud Arbery, Breonna Taylor, George Floyd, Rayshard Brooks, and others, occurred because justice for the victims, and justice for black Americans in general, has once again been denied. Arguments have even been made that criminalized the victims, blamed the protesters, proclaimed “All Lives Matter” and “Blue Lives Matter,” deflected the culpability of the offenders by blaming “black on black” crime, and continually justified the murders of unarmed black people. Aside from Jim Crow segregation of the 60s, the injustices that caused the civil unrest during the Civil Rights Movement were no different than the injustices that caused the civil unrest during the Black Lives Matter Movement. Both were fighting against police brutality, political and economic disenfranchisement, Human Rights violations, lynching, and racial terrorism.

In 1967, when President Lyndon B. Johnson established The National Advisory Commission on Civil Disorders (also known as the Kerner Commission) to report on the nationwide events and the cause of the unrest, the Kerner Report stated that “the causes of recent racial disorders are imbedded in a massive tangle of issues and circumstances — social, economic, political, and psychological — which arise out of the historical pattern of Negro-white relations in America.”³

Almost five decades later, in 2015, in response to civil unrest in Ferguson, Missouri after the murder of Michael Brown, U.S. Attorney General Eric Holder and the Civil Rights Division of the United States Department of Justice investigated the Ferguson Police Department for claims of police brutality and other forms of violence. The major findings of their investigation found “a community that was deeply polarized, and where deep distrust and hostility often characterized interactions between police and area residents. Our investigation showed that Ferguson police officers routinely violate the Fourth Amendment in stopping people without reasonable suspicion, arresting them without probable cause, and using unreasonable force against them.”

Now, in 2020, not only have police reportedly killed 164 Black people in the first 8 months, but various white supremacist hate groups and evangelical churches have become more vocal in spewing their vitriolic hatred of black people. This has been fueled by Trump’s racist rhetoric and his constant refusal to denounce white supremacy, causing a toxic racial divide among American citizens, and exacerbating the evil, hegemonic, violence and oppression that already existed in this country.

The justice we seek must be systemic, and it must dismantle the racist structures upon which this country was founded, to create a system that is based on equity and equality. It is not only freedom from police brutality and racial terrorism, but also protection of our Constitutional, Civil, and Human Rights. It is the dismantling of the doctrine of qualified immunity that allows police officers to kill unarmed black men, women, and children with impunity. It is the end of no-knock search warrants, the school-to-prison pipeline, Program 1033 & the militarization of the police, mass incarceration & the privatization of prisons, underreporting police use of force, voter suppression & gerrymandering, the war on drugs, the three-strikes and mandatory minimums laws, the stand your ground laws, racial profiling, wrongful convictions & death penalties, housing discrimination and gentrification, job discrimination, environmental racism, immoral public defenders and corrupt plea deals, racialized healthcare disparities, political & economic disenfranchisement, inequities in the educational system, food injustice, and racialized, corrupt capitalism. It is the reform of the cash bail system, the reform of the racist policies & procedures in law enforcement and the criminal justice system, and the removal of white supremacists from positions of authority and power. The implementation of these and other forms of justice are imperative to the black community and imperative to American society, and the time for justice is now.

L.A. Justice is a theologian, author, and social justice activist with previous careers as a biochemist and teacher.