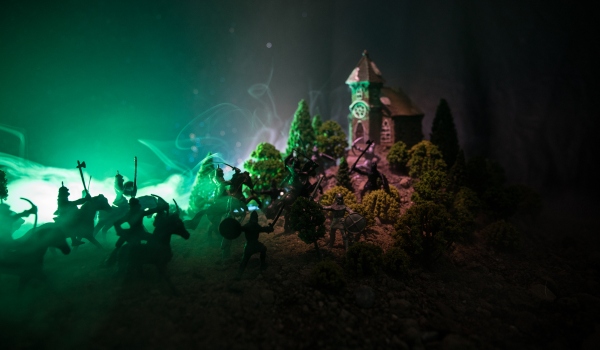 The medieval has made a resurgence in the news. Hakeem Jeffries, Democratic Senator for New York, issued a tweet declaring “No medieval border wall for Trump,” followed by Dick Durbin, Democratic Senator for Illinois, who tweeted that “a $5 billion medieval wall is no solution for illegal immigration or stopping drugs from coming across our border.” Donald Trump responded from the Oval Office, stating that “they say it’s a medieval solution, a wall. It’s true, because it worked then and it works even better now.” Later, speaking in Texas at the border with Mexico, President Trump praised expensive Secret Service cars by saying that “a wheel is older than a wall.” As many have pointed out, he’s factually wrong on the wheel/wall dating – the earliest walls predate the earliest wheels by thousands of years – but the President’s confused chronology may not matter much for his main point. Insofar as anyone can figure that out, it seems to be that old technologies can still provide good solutions in today’s world.

Of course, as is probably obvious to anyone with a basic knowledge of premodern defenses, nothing from medieval Europe looked much like what is being proposed for the US-Mexico border. Ranging from earthworks and ditches to masonry walls with crenellations and towers, medieval defensive structures were neither the concrete barrier nor the steel slats envisioned by the Build the Wall enthusiasts. Furthermore, medieval defenses didn’t always do a very good job of protecting people against invaders. The most famous walls in medieval Europe cost a fortune to construct and maintain, and even the strongest among them could be scaled, besieged, or, once gunpowder artillery was introduced, blasted into a heap of rubble. And in any case, medieval city walls were not meant just to keep people out. They had gates, which were often the most beautiful parts of the defences, and these were supposed to let people in for commerce and for living. Medieval urban populations did not grow through natural increase. The only way to increase (or, in most cases, even maintain) a town’s population was through immigration. In many medieval towns, customary law granted freedom to anyone living there without causing trouble for a year and a day. Medieval town air made you free, in a way that crossing a modern state boundary does not.

Distinctions between medieval walls and twenty-first century border security are important to keep in mind, but I would suggest that the President of the United States actually is following a medieval tradition in one respect: he sees in the wall an opportunity for symbolic display. Although medieval states tended not to build walls along their borders, cities were often enclosed, and city walls had functions beyond straightforward defense. A wall around a medieval city, either physically constructed or imaginatively depicted on a town seal, was a mark of pride and a sign of power. It proclaimed to anyone approaching that here was a place of wealth. Here was a place of commerce. Here was a place set apart somewhat from the surrounding area, whose citizens benefitted from special legal and economic privileges. A walled city also alluded to a certain moral righteousness, with its battlements on earth reflecting an ideal place above – the heavenly city of Jerusalem as described in the Book of Revelations. Comparing these ideas of power and rectitude, one might hear more than a faint echo of the ideal fortified medieval city in Trump’s idea of a “big, beautiful wall.”

So the President has decided to embrace the “medieval” label as something positive for his wall hopes. His critics, meanwhile, are using the same “medieval” label to denigrate the idea. (Durbin’s tweet about the medievalness of the wall continued with an insistence on modernity, asserting that the real solutions were “smart investments in modern screening technology and additional customs personnel.”) In this, they are participating in a different political trend, one that characterizes something as “medieval” in order to emphasize its backwardness or brutality. Scholars have been challenging this characterization for generations, and they have increased the volume of their objections in recent years. They have argued that ISIS is not medieval, Game of Thrones is not medieval, disinterest in education is not medieval. In making such arguments, medievalists are not indulging in a grumpy complaint that their period is being unfairly maligned in popular culture; they are advocating for a better understanding of the past, and they are warning that when we call contemporary violence “medieval,” we excuse ourselves from acknowledging causes in our own era and, sometimes, our own complicity. By calling the violence medieval, we are othering it from ourselves. Indeed, in another twist of othering, medievalists have also been grappling with the deeply disturbing tendency of white supremacists and their allies on the far right to usurp medieval imagery, and they have entered into a sometimes heated debate about how academic medievalists should respond. Yet still, in spite of these conversations, the synonymity of “medieval” with “backwards” has proved tenacious in the popular imagination. Another news story making the rounds is showing just how fond we are of the idea of a dark past.

Flecks of lapis lazuli were found in the dental calculus of a woman who had been buried in the cemetery of a German religious community in the late 11th or early 12th century. The interdisciplinary team of researchers who studied the case produced a fascinating article that explains their methods and their conclusions, and their discovery provides important evidence about medieval book production. Lapis lazuli, a stone then only available from Afghanistan, was an extremely valuable material. Worth its weight in gold, it was the main ingredient in ultramarine, a brilliant and very stable blue pigment. Only highly skilled illustrators working on the most luxurious artistic productions would have used it. The person buried with flecks of the stone in her teeth, a person whose name we do not know, would have been known in her own time as an accomplished artist.

Some news reports are correctly reporting that historians are excited to have physical evidence corroborating textual sources for religious women’s book production activities. An As it Happens interview with Alison Beach, one of the historians cited in the article, does an especially good job of contextualizing the discovery. Not all the news reports are telling this as a story of fruitful collaboration between scientists and humanists, however. Some make it sound like the idea of medieval women illustrating manuscripts is totally out of the (non-ultramarine) blue. CNN ran the headline “Rare blue pigment found in medieval woman’s teeth rewrites history.” The Atlantic says in its article that “these embedded blue particles…illuminate a forgotten history of medieval manuscripts: Not just monks made them.” Forgotten by whom? Not by the historians cited in the study. Reading these reports, it’s as if nobody thought that nuns were scribes and illuminators. The study itself, by contrast, carefully situates the findings in current historical understanding. The authors write that there has long been an assumption that monks rather than nuns produced books, but that “recent historical research… has challenged this view, revealing that religious women were not only literate but also prolific producers and consumers of books.” They recognize, in other words, that their discovery adds further evidence to what historians already knew: nuns produced and read beautiful books.

As a medievalist, I’m pleased to see medieval walls and medieval scribes deemed newsworthy. I just wish that the underlying assumption for their newsworthiness were not that everything medieval is bad and dark and stupid and therefore totally different from us. No era holds a monopoly on ignorance and cruelty, and to think that these problems have been left behind in the past absolves us of a responsibility to reflect on our own behaviour and recognize the sources of our own prejudice. The false equivalence of “medieval” with “backwards” gives the people of the medieval world too little credit while giving us too much. It didn’t surprise people in the year 1100 that a woman was capable of creating gorgeous books. It surprises us. And I wonder what people in a thousand years would think of that. So let’s adopt a little more humility when we talk about how to help people who are trying to escape desperate conditions. These conditions are not medieval. They are from our world. And it falls to us who are here today to figure out what to do about them.