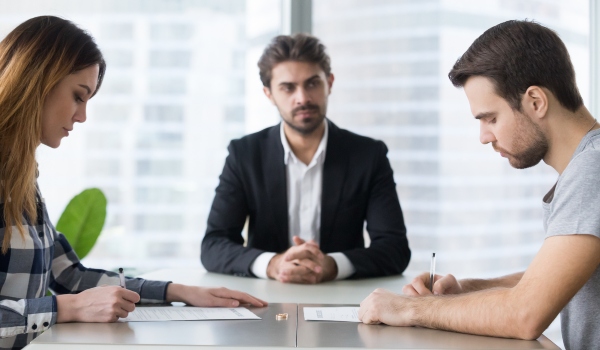 —
“The Coming Divorce Decline, ” which I first posted a year ago, has now been published by the journal Socius. Three thousand people have downloaded it from SocArXiv, I presented it at the Population Association, and it’s been widely reported (media reports), but now it’s also “peer reviewed.” Since Socius is open access, I posted their PDF on SocArXiv, and now that version appears first at the same DOI or web address (paper), while the former editions are also available.

Improvement: Last time I posted about it here I had a crude measure of divorce risk with one point each for various risk factors. For the new version I fixed it up, using a divorce prediction model for people married less than 10 years in 2017 to generate a set of divorce probabilities that I apply to the newly-wed women from 2008 to 2017:

…the coefficients from this model are applied to newly married women from 2008 to 2017 to generate a predicted divorce probability based on 2017 effects. The analysis asks what proportion of the newly married women would divorce in each of their first 10 years of marriage if 2017 divorce propensities prevailed and their characteristics did not change.

The result looks like this, showing the annual probability falling from almost 2.7% to less than 2.4%: 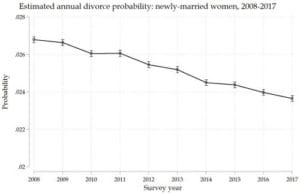 The fact that this predicted probability is falling is the (now improved) basis for my prediction that divorce rates will continue to decline in the coming years: the people marrying now have fewer risk factors. (The data and code for all this is up, too).

Prediction aside: The short description of study preregistration is “specifying your plan in advance, before you gather data.” You do this with a time-stamped report so readers know you’re not rejiggering the results after you collect data to make it look like you were right all along. This doesn’t always make sense with secondary data because the data is already collected before we get there. However, in this case I was making predictions about future data not yet released. So the first version of this paper, posted last September and preserved with a time stamp on SocArXiv, is like a preregistration of the later versions, effectively predicting I would find a decline in subsequent years if I used the same models — which I did. People who use data that is released on a regular schedule, like ACS, CPS, or GSS, might consider doing this in the future.

Rejection addendum: Sociological Science rejected this — as they do, in about 30 days, with very brief reviews — and based on their misunderstandings I made some clarifications and explained the limitations before sending it to Socius. Since the paper was publicly available the whole time this didn’t slow down the progress of science, and then I improved it, so I’m happy about it.

Just in case you’re worried that this rejections means the paper might be wrong, I’m sharing their reviews here, as summarized by the editor. If you read the current version you’ll see how I clarified these points.

* While the analyses are generally sensible, both Consulting Editors point out the paper’s modest contribution to the literature relative to Kennedy and Ruggles (2014) and Hemez (2017). The paper cites both of these papers but does not make clear how the paper adds to our understanding derived from those papers. If the relatively modest extension in the time frame in this paper is sociologically consequential, the paper does not make the case clearly.

* There is more novelty in the paper’s estimates of the annual divorce probability for newly-married women (shown in Table 3 and Figure 3), based on estimating a divorce model for the most recent survey year, and then applying the coefficients from that model to prior years. This procedure was somewhat difficult for the readers to follow, but issues were raised, most notably the question of the sensitivity of the results to the adjustments made. As one CE noted, “Excluding those in the first year of marriage is problematic as newlyweds have a high rate of divorce. Also, why just married in the last 10 years? Consider whether married for the first time vs remarried matters. Also, investigate the merits of an age restriction given the aging of the population Kennedy and Ruggles point to.”